Sprawling between the great rivers of Saône and Rhône, Lyon is a grand dame of a city. Sure, she’s old – built by the Romans kind of old – a bit tired, definitely in need of a face lift, but confident in her powers of survival and adaptation.

We had a bit less than two days in Lyon and there are lots to do, so we tried to prioritise according to what we like the best, leaving time to relax and soak in the atmosphere.

First things first; Lyon is a perfect city to discover on foot, armed with just a smart phone and a good pair of walking shoes. This way, you’ll immerse yourself with different faces of the city and burn those calories from over indulging in one of Lyon’s famous eateries. But if you’re not up to walking, there’re tons of other ways to discover the city; bicycle, Segway, bus, boat or a scooter.

Then a bit of history : When Romans built Lyon – then Lugdunum- they did it around the Fourvière hill which today is known as Vieux Lyon. Fast forward to middle ages and Lyon became the centre for silk manufacturing in Europe. The silk workshops popped in the neighbouring hilltop at Croix-Rousse where the silk workers, or the canut , made the city rich and redefined it’s architecture.

However accessing fresh water was the problem. In a city with growing population and inadequate aqueducts, passageways or traboules were built to provide quick accesses to the river front. The traboules were also used by the Canut workers to carry their heavy loads from their workshops in the Croix-Rousse to the textile merchants at the foot of the hill.

A century later the traboules were used by the resistance against the occupying Nazis. Today, they are a great tourist attraction. Once there were as many as 400 traboules in Lyon, but just over 40 are open to the public now, each clearly marked with a small identifying seal.

Half of the fun is finding them of course, but failing that, there are guided tours. We were staying at the heart of Vieux Lyon at XVI de la Rose; a kitsch and comfortable apartment in an old building with its own traboule, so finding our first seal was no brainer. Afterwards we took a long walk around the old neighbourhoods of the city, savouring our ice creams and checking for the ghosts of the past. We only found fellow tourists instead but wandering the tiny cobbled streets were a great way to start our day.

Wall murals also are a common sight in Lyon, some quite famous, like this one in Croix-Rousse.

Another must see is the the Basilica of Notre-Dame de Fourvière. Known by the locals as the L’Elephant renversé -upside-down elephant- it sits on the top of Fourvière hill, aka the praying hill. (As opposed to the Croix-Rousse; the working hill).

Housing stunning mosaics, beautiful stained glass and a crypt of Saint Joseph, the basilica is a spectacular sight. Admittedly the over-the-top ornate style of the sanctuary hits you first, but after a while you get used to it and start enjoying this extravaganza.

I loved the huge brass chandeliers.

The basilica is dedicated to Virgin Mary who saved the city from cholera twice and prevented the Prussian invasion once. I guess she was elsewhere occupied during the Nazi occupation. Nowadays she sits upon the bell-tower of the Fourvière and continues to ward off any and all evil from Lyon. A very busy lady.

Once you’re up there, go and enjoy the mind-blowing view from the esplanade. Here Lyon opens up like a 3D map in every direction, perfect for looking for new places to discover or taking a few selfies for your Insta feed.

A perfect way to kill a few hours is to visit one of Lyon’s many museums. From a considerable selection, we opted for the Musee de Beaux Arts de Lyon.

It’s located on Place des Terreaux, together with the Hôtel de Ville and the Fontaine Bartholdi , so we crossed them off our list as well. The museum’s collections range from ancient Egypt to the Islamic world; from Renoir, Monet and Co. to contemporary sculptures. There’s a bit of everything, and if you get bored, you can always move on to the next. One of the most interesting and unique pieces was the little bag full of gold and silver coins that they dig up quite recently during an excavation to build a parking lot just nearby.

Don’t forget to sit and relax at the garden of the museum; it is a sanctuary of zen.

If all these walking and art made you a bit peckish, no worries, Lyon is a foodie’s wet dream.

The first that comes to mind on Lyon’s culinary scene are the bouchons.

Red chequered table cloths, a bottle of Côtes du Rhône on the table, heaps of meat on your plate and a warm inviting atmosphere are the telltale signs of the “bouchon”, a typical Lyon restaurant which serves classic dishes such as head of veal, sausage loaf or a cheese dip named “cerveau de canut – the brain of a silk worker. Charming.

I was feeling slightly less adventurous so opted for a Tartare de Boeuf which came as ‘Le Classic’ in other words, undone. The chef just put the minced meat, egg yolk, a bit of chopped onions and capari on a plate and served them to me. Luckily I’m not a novice on classic French cuisine , so I mixed all the ingredients with gusto and had a lovely dinner. 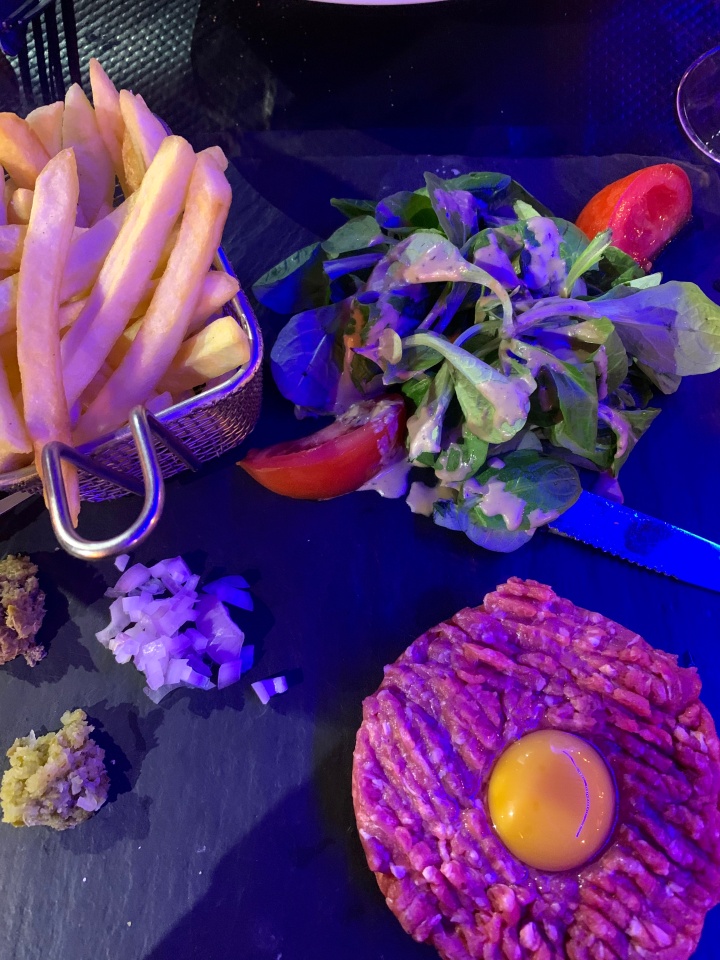 Try Chez Paul to get a taste of these classic Lyonnais restaurants.

Lyon is also the city of Paul Bocuse – the pope of the nouvelle cuisine. Apart from his world famous 3 Michelin star restaurant, there are his more budget friendly brasseries, with menus representing the cardinal points of the compass. For dinner, we didn’t feel like dressing up for haute cuisine after a full day of touristing, so we decided to try the Brasserie Nord.

We started with a shared Terrine du Foie Gras with a tasty crusted exterior, one of the best I ever tasted.

One of the wonders of the French cuisine is their ongoing resistance in turning their chicken into plastic, so I ordered a Poulet Bresse – the French even name their chicken – which came with a delightfully light tarragon sauce. The taste and the aromas took me back to my mother’s cooking, who was also a great cook. Being a lifelong advocate of natural tastes and fresh ingredients, I’m sure she would have approved M. Bocuse.

But for me the most exciting foodie venue was the Les Halles Paul Bocuse, a gourmet indoor food market full of delicious displays and restaurants.

There are fruits and vegetables, wine, dried meats, poultry, truffles, spices, flowers, seafood and more, all from world-class vendors. There are also several bars and restaurants. Everything looks so fresh and good, it’s a feast to the eyes and the palate.

We went there on a Sunday and the place was naturally packed. We managed to squeeze at a little table at Maison Rousseau and had a lunch to remember . After jointly killing a dozen oysters, I had the Saint Jacques with a chorizo sauce and my husband had the most delicious soup de poisson ever. All washed up with a crisp Chardonnay. Heaven.

If you are more a true carnivore, the bistro AOC comes highly recommended.

My only sorrow is not to be a local and go there for my weekly shopping. Of course I had to go there very early in the morning to get the freshest choices and avoid the tourist rush, but it will be totally worth it.

Lyon is the city of the Lumière brothers, who invented an improved cinematograph and were among the first filmmakers in history. There’s a museum that tells their story where you can also see their early movies.

Lyon is also the city of Antoine de Saint Exupery, the pilot and author of one of my all time favourite books, The Little Prince. By chance I re-read it this summer and was amazed how I can still relate to it, as when I was 10 years old. His style could be naive and almost childlike, but his messages are timeless and universal.