I love chocolate. I mean who doesn’t? It’s an amazing super-food; nutritious, a powerful source of antioxidants and endorphin plus it’s mouth-wateringly delicious. 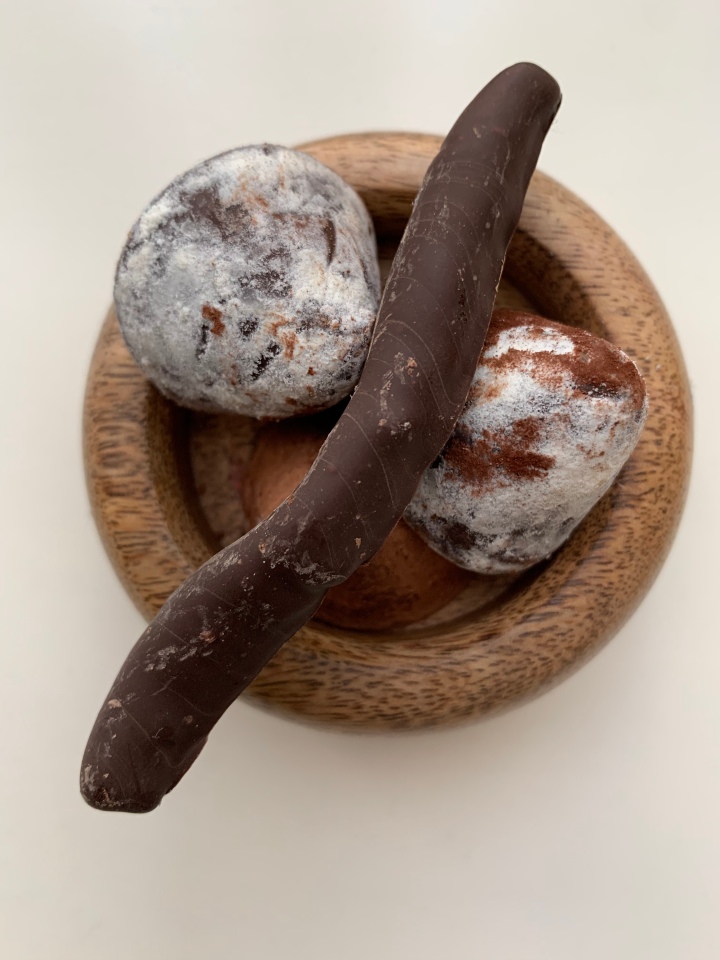 Ever since the Aztec emperor Montezuma served Spanish conquistador Hernàn Cortés a cup of hot cocoa in 1519, which were native to the New World, chocolate first became a fad in the palaces and high courts of Europe and later, well, everywhere. Today chocolate is consumed and enjoyed all around the world, so much so that some countries have created their own traditions.

Italians amore dark chocolate, some considering it to be an aphrodisiac. In Mexico it’s common to start the day with a cup of hot cocoa. They also using it in cooking, inventing a delicious chili cocoa sauce that’s often stirred into meat dishes.  For Turks, engagements and religious holidays should be celebrated with the best chocolate that the family could afford. French prefer chocolat noir with more subtle flavours and Switzerland’s signature chocolate is milk. No offence, but for me, white chocolate is just sweet condensed milk shaped like a bar.

Today chocolate production is a multi billion dollar business , and as it happens, some of the best chocolatiers in the world are located in Brussels, a stone throw away from my home. The country’s love affair with chocolate goes back to the 19th Century, when cocoa was shipped home from Congo, which had become its new African colony. Belgium has taken all of the global tastes and influences of the time and developed their unique chocolate-making technique and the artisan industry. They are still at the forefront of the boutique type chocolate market.

Neuhaus has become one of the country’s most famous global brands along with Callebaut, Cote d’Or, Leonidas and Godiva although the latter is owned by a Turkish group now.

Belgians take their chocolate seriously and believe it must attract all the senses, not just the taste buds. As a result, it’s difficult not to be tempted by the mouth-watering display windows in nearly every town. The confections are divided into two categories: Truffles have soft, crumbly chocolate shells filled with buttercream, while pralines are made of a hard chocolate shell with a wide range of soft fillings.

I usually prefer specialised boutique type chocolatiers because they like to experiment more with ingredients and styles. The down side is they are often more expensive than the famous brand next door. The multi-branch global brands also do that once in a while but since they have to cater for a larger clientele, they tend to stick to tried and tested recipes. I love chocolate but I don’t eat a lot of it, so I like to experiment and try different chocolatiers.

Although it’s quite difficult to find bad chocolate in this country, for me some chocolatiers are exceptional. So here are my top tips for Brussels.

Pierre Marcolini, is so meticulous about his products, he’s one of the few chocolatiers to roast his cocoa beans himself, currently originating from more than 12 different locations. In his belief that, like wine, cocoa deserves to bear the mark of its noble origins, Pierre Marcolini is the first chocolatier to have used denominations of origin for chocolate. Apart from using them for the pralines he also prepares them as chocolate bars. This way you can savour the taste of cocoa of different origins and have your favourites, just like preferring a Cabarnet Sauvignon to a Gamay.

In the last years he started expanding globally with chocolate boutiques and patisseries in major European capitals as well as China, Japan, UAE and even in Hawai. His displays are often minimalist, the pralines lined up like priceless jewels and it’s very rare that the tourists don’t take frantic selfies in front of his flagship store in Sablon.

Although everything in his stores are top quality – and top price- I simply adore the chocolate bars and try a different cru when I visit one of his stores. It’s great to see other chocolatiers are starting to adopt to this bean-to-bar approach, but Marcolini is still the best.

He also wrote quite a few books on the secrets and delights of chocolate making.

Frederic Blondeel is another great maitre chocolatier who says he’s a roaster at hearth. Another passionate advocate of the bean-to-bar school, he is involved in all the phases of his craft, from selecting the beans deep in the tropical plantations right up to the end products; intensely powerful bars, delicious pralines, couvertures and spreads to make killer sandwiches.

He might easily claim to be the best chocolatier in Brussels for he won the prestigious top award from Gault & Millau in 2018.

His tea room/shop in Sainte Catherine is one of my favourite places to spend time on a cold winters day, sipping hot chocolate, savouring the different aromas and reading my book. You can also visit his atelier to understand more about the process.

Wittamer is more an excellent patisserie than a chocolatier. Of course they make superb truffles, ganache and pralines – I mean, who doesn’t ? – but their gateaus and macarons are out of this world. If you don’t believe me, ask Queen Mathilde of Belgium who had selected Wittamer to create her wedding cake.

Wittamer family have opened their first patisserie at the heart of Brussels almost 100 years ago. Now they have two stores in Sablon – one dedicated only to chocolate and macarons and the second is a two storey patisserie with a lovely tea room . It’s always a good idea to pop up there for a quick coffee and one of their yummy creations. Even their bread is delicious.

Another favourite is Chocolate Passion, a small chocolatier in Sablon with a very good selection of homemade truffles and pralines. The young proprietor is always ready to explain the specialities. As an added bonus, their prices are very reasonable compared to other boutique type chocolatiers.

My guilty pleasure is their orangettes and gingerettes which are just subtly sweetened and covered in top quality chocolat noir that they sell in small sachets.

When it comes to big brands I go to Neuhaus or Leonidas. They both provide good value for money with yummy – and just a tad too sweet- chocolate. If you are flying home, it’s a good idea to visit their stores. It will make a great gift and you don’t have to rob a bank. Cote D’or’ Noir de Noir is the perfect choice that you can find in any supermarket, also good for making a delicious chocolate sauce at home.

If you want a one stop shop with some serious Girl Power, Elisabeth’s magasins are the place to be. The lady owner travels the country to select the best of the famous Belgian delicacies as well as long forgotten local traditions. Her shops offer a range of products from artisanal cakes to real Cuberdon noses to Frederic Blondeel’s divine chocolate bars and truffles.

Chocolate is also an inspiration for writers and film makers. One of my favourite Lasse Hallström movies is Chocolat, starring the Juliette Binoche . Johnny Depp who played her vagabond lover at that film also starred as Willy Wonka, one of Roald Dahl’s most unforgettable characters in the movie adaptation of Charlie and the Chocolate Factory.

Another favourite is Julie & Julia , starring none other than the wonderful Meryl Streep together with Amy Adams.

It’s quite common to go to a chocolatier and buy just a few of each of these tiny wonders, taking your time and discussing the exact tastes in each with the proprietor. Would you prefer the one of dark chocolate & pistachio with a hint of chili notes or like the one with a heavy caramel and cognac filling with vanilla sprinkles on top ? Wish all life choices could be this sweet.