I consider myself as a true Mediterranean i.e. no place is perfect without the sun and the blue skies and the deep turquoise colour of the Med, but guess what? The landscape could be beautiful without any of the above.  If you don’t believe me just visit Scotland.

We started at Edinburgh, which is truly an enchanting city. Rich in culture and history, it’s also undeniably hip with its cool bars, restaurants and boutiques. My first visit to the city was during the Festival a few years ago. It was buzzing with people rushing from one venue to another trying to capture as much ‘culture’ as possible in some form or another.  I know it doesn’t sound very nice, but doing it was actually quite fun. This time it was only slightly less crowded.

The weather was generally terrible which didn’t affect our mood in the slightest.  Since it was the first time for some of our friends in Scotland, we did some of the touristic stuff , the Castle , the Camera Obscura (ok we looked at the building from the outside and went for a drink), the obligatory cashmere shopping. Mostly we walked the city, and tasted various brands of Scotch Whiskey (my personal favourite is Dalwhinnie) at the pubs around Haymarket . The nights were alternatively spent drinking cool cocktails at Tiger Lily on Prince Street or tasting great food at La Garrigue.

Edinburgh is a paradise for book lovers. Some of the great writers of the past three hundred century lived here at some point in their lives. Sherlock Holmes, Harry Potter, Peter Pan and Dr. Jekyll & Mr. Hyde are some of the characters created here. There are a number of tours for culture vultures showing the favourite hounds of Stevenson, Scott, Burns and J.K.Rowling.

Outside of Edinburgh there is the lovely Rosslyn Chapel which was made famous in one of the Dan Brown novels.

Whatever your feelings towards his books may be, the little Chapel and the surrounding countryside are worth a visit. Built in the 15th century, it’s a wonderful combination of architecture, myth and history. The interior of the chapel is filled with carvings, statues and symbols and the guides explain all in entertaining detail.

One example is the Apprentice Pillar, which is the object of one of my favourite Rosslyn stories. Once upon a time when the chapel was being built, there was a master mason who carved a pillar and then went on a journey to extend his knowledge to carve a more elaborate one. But during his absence his apprentice carved another pillar next to his master’s which was much more exquisite than the first. Returning back and seeing his apprentice’s masterpiece, the master mason went mad with jealousy and killed the apprentice which in turn caused him to be executed.  If that was not enough, they also put the mason’s own statue across from the Apprentice Pillar, making him look at his downfall till eternity. Justice in 15th century was a serious business. 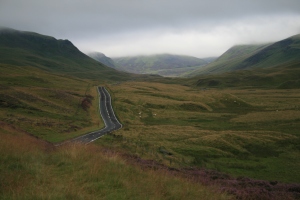 There are many more statues and stories; the seven sins and seven virtues, the musical cords hidden in the keystones, the Green Man and the Jesus. For me, the most entertaining ones are around the Knights Templar ; especially  the whereabouts of the secret treasures of the Templar, what exactly is buried under the chapel just under the arrow shaped keystone (the Holy Grail, the Arc of the Covenant or the body of Elvis?) and whether the Knights Templar discovered America before Christoph Colombus (just look at the aloe and maize leave carvings.).

Just a few miles from Rosslyn on a lovely country road we happened upon the remains of a 12th cc Templar church which was filled with beautifully carved old tombstones. If you want to experience peace and calm among the ruins of a graveyard when actually still alive, that’s definitely the place. 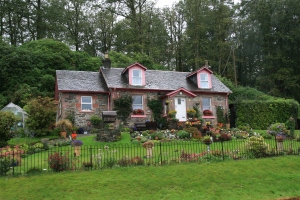 After Edinburg we continued to Loch Lomond for a brief stay at the Lodge on Loch Lomond. The weather was really horrible so we couldn’t take a cruise on the Loch , but nevertheless enjoyed the hotel, the food (yes, even the haggis, tatties and neeps)  and the little village of Luss with its houses fit for Cinderella and seven dwarfs.

Scotland is a country of lakes (or lochs as they are called here) and castles. We tried to include as much of them to our tour as possible.

We then moved on to Northern Ireland which is a land of green hills, sheep, poets, magical creatures and friendly people who speak English with the speed of lightning.

We started at Belfast, which for me was Guiness, pubs to drink Guiness and the Merchant Hotel which served Guiness. Plus the Titanic, the Cathedral and a few other places.

We then continued to Bangor, a pretty seaside town just outside Belfast which hosts one of the best restaurants in the country : The Boathouse. Just go to the marina and look for a small stone building which was once the harbormaster’s office. Now it’s a great little restaurant whose handsome chef visits all the tables to discuss the food and the experience. If you prefer pub food drive a few miles to Donaghadee and try Pier 36 for good seafood or Grace Neill’s, the oldest pub in Northern Ireland for the atmosphere.

One afternoon we had a few hours to kill so we decided to visit the Folk and Transport Museum. The Transport Museum is a boy’s dream full of trains and cars and buses and everything you ever wanted to know about Titanic. We girls and boys had a lot of fun there.

The Folk Museum is an open space museum of a typical 18th century village showing how the people lived then. In its post office we met Viktor, the post office master and a very kind guy who drafted for us the best cross country driving route, carefully emphasizing where to turn and what not to miss.  We took his advice and had a great day driving around. The highlights were Carrickfergus Castle (more Templar stories and decades of wars) , the Torr Road on the way to Ballycastle (which was Viktor’s best contribution), Bushmills Distillery to taste 16 year old malt whiskey and finally the Giant’s Causeway which deserves more time than we manage to spent there. 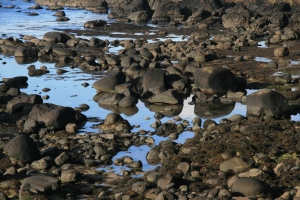 Giant’s Causeway or Clochán an Aifir as Irish call it is one of the places that feel out of this world.  It is a huge area of some 40,000 basalt columns formed by an ancient volcanic eruption. But when you actually see the size and shape of the landscape somehow this explanation loses its meaning. This is one of the places legends and reality goes hand in hand, therefore I choose to believe the legends instead.

Legend has it that the Irish Giant Finn McCool built the causeway to walk to Scotland to fight his Scottish counterpart Benandonner. But Finn fell asleep before he got to Scotland. When he did not arrive, the much larger Benandonner crossed the bridge looking for him. To protect Finn, his wife Oonagh laid a blanket over him so he could pretend that he was actually their baby son. When Benandonner saw the size of the ‘infant’, he assumed the alleged father, Finn, must be gigantic indeed. Therefore, Benandonner fled home in terror, ripping up the Causeway in case he was followed by Finn.

In order to find out which version you believe in, just go and visit. I’ll definitely do it again.

Lands this ancient requires a book good and old. I recommend The New Atlantis Sir Francis Bacon to shed some light into mysteries. Or if you want to write your own saga but don’t know how to start, there’s no better guide than On Writing by Stephen King, one of the greatest and scariest writers of our times.

2 thoughts on “Scotland – Footsteps of Templars and Giants”