Lately I am dreaming of Marrakesh, the city of palaces and snake charmers.

We’ve arrived there one evening, around sunset. The airport – just another modern airport that could be anywhere – gave no signs of the city that we were about to discover. The first clue came from our taxi driver. He told us that it was a local fête, so cars were not allowed inside the medina where our riad was located.

When he dropped us at one of the gates of the old town and we passed through the ancient mud walls that encircle the city’s medina, it was becoming apparent that this was someplace special. The fusion of Arabian, African and European influences over the centuries has created an utterly unique place.

Once an imperial capital , Marrakesh was the centre of culture and commerce for centuries. The sultans, pashas and sheriffs built palaces, the wealthy traders built riads (traditional Moroccan houses with central courtyards); each one with its own story. They were surrounded by walls to provide protection and privacy. Today most of these buildings are converted into chic boutique hotels hiding behind the unassuming doorways and twisting alleys of the medina.

There are a lot to discover in Marrakesh and we tried our best in the few days that we spent there. My favourite way of discovering a city is to get lost in its alleys and Marrakesh is a heaven for that.

We’ve started at the Jemaa el Fna, Marrakesh’s main square and marketplace. It’s the quintessential middle eastern market place that we see a hundred times in Indiana Jones or Bond movies; crowded, noisy and the life blood of the town.

During the day, it is filled with snake charmers and local medicine men with their vials and jars, powders and homemade lotions. They all claim to whisper spells, so that the patient will experience no pain, or the snake won’t bite.

There are stalls selling fruits and sweets; water sellers with leather water bags in their shoulders, offering much needed refreshments in this hot mess of humanity.

There are magicians and story tellers in their blue Tuareg robes, mesmerising the locals with their stories of ancient heroes and beautiful princesses, told in Berber or Arabic.

As the day turns into night, the crowds on the square peaks. Within a few minutes, the food stalls open for business as Jemaa el Fna turns into a giant open air restaurant. Tourists and locals dine on sheep’s brains and spiced Berber sausages, tagines, lamb skewers and trout.

North of the square, you’ll reach the souk where you can shop for Berber rugs, hand woven textiles, spices, artisanal jewellery and pottery. The souks of Marrakech are the largest in Morocco and among the most exotic marketplaces to shop in the world. Take your time and enjoy the richness of colours and scents. Choose something and haggle over the price, for it’s a time honoured tradition. Whatever you buy, you’ll probably won’t need, but they might have the power to bring you to that moment in time, years from now.

As for me, I’ve bought a colourful Berber rug in shades of rust red, deep yellow and blue and cushions emblazoned with bold geometric patterns. They brighten my rooms.

Don’t forget to buy Argan oil, produced from the kernels of the Argan tree that are endemic in Morocco. The locals use it for everything. They dip their bread in it, put it on salads or couscous. They also use it on their skin to moisturise and hair to make it more shiny and strong. Don’t go for the cheap options or you could end up with perfumed cooking oil. Argan oil is pricey, but it’s worth it. Try Nectarome or Herboristerie Firdaous for the real deal.

Just a stone’s throw away, there are a couple of rooftop restaurants to sit back and relax. Nomad is famous for its Mediterranean influenced Moroccan specialities like herb infused green couscous and fried calamari from Agadir. However we were not too hungry, so we saved Nomad for dinner and went to the Cafe des Epices across the square for fresh salads and refreshing juices. One additional benefit was the view, we spent hours watching the Atlas mountains in the horizon while sipping our cold mocktails.

Afterwards we found our way to Le Secret Jardin, one of the most ancient palaces of the Medina. It has recently been renovated into two gardens, an Islamic garden and an exotic garden. We took our time there, just taking in the perfume of the flowers and marvelling at the intricate designs of the pavilions and ornamental pools. We felt calm and renewed after the hustle and bustle of the souk.

Another day was spent at two of the most impressive palaces, Bahia and El Badi.

Bahia Palace is right out of the tale of the 1001 nights. Constructed in early 19th cc, it was built as a private palace for the grand vizier, his 4 wives, 24 concubines and I don’t know how many children. With 28 women and countless children at home, I wonder how he found anytime to do his ‘viziering’.

The palace is a labyrinth of countless rooms, gardens & courtyards, each beautifully designed and exquisitely decorated by the best artisans from Fez.

Walking around the palace, it’s easy to imagine Scheherazade telling her stories to the Grand Vizier – in my imagination she’s a young concubine, ambitious and witty, trying to secure her place in the harem and maybe hoping for some sort of a influence and freedom in this men’s world.

If Bahia palace is beautiful, the El Badi is majestic with huge ramparts, vast gardens and pools. In it’s heyday, which was the late 16th century, it must have been a rival to the more glamorous palaces of the West. You can view the Atlas mountains from it’s high walls and there’s a little museum inside showing black and white photos of the Tuareg warriors and Berber tribesmen.

Like many artists before him, YSL fell in love with the city and returned there often. In Marrakesh, he could stroll anonymously through the alleys and souks, taking inspiration from the crafts and colours that surrounded him.

The mYSLm is located on a street that had already been named after the designer, near Jardin Majorelle, which had been his holiday residence since 1966. Today it is among one of the main attractions of Marrakesh, with its gardens, museum of Berber cultures, and exhibition space. 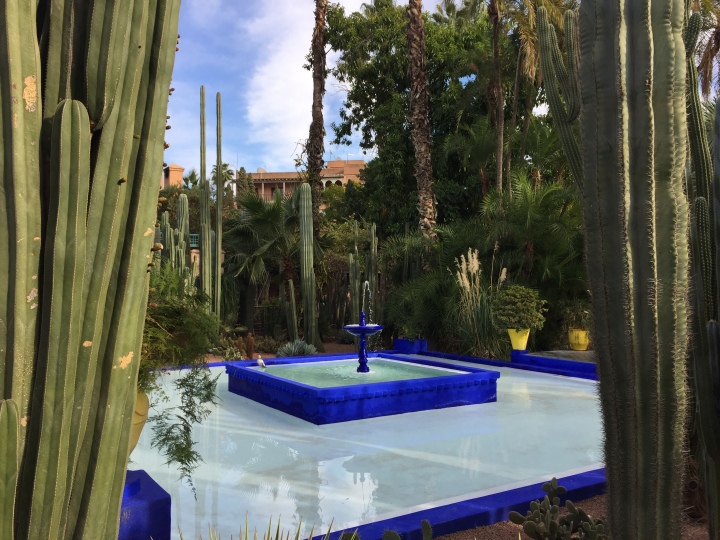 The villa and the surrounding gardens were originally built by Jacques Majorelle, an early Orientalist painter who arrived at Marrakesh in 1920s, where he fell in love with the vibrant colours and the quality of light.

There’s a permanent exhibition of his works in mYSLm which is a must see. Orientalist artists were masters of using light and their work show us the Orient and its people in amazing detail.

This is the posh part of the town, with concept stores, designer boutiques and patisseries so take your time to explore the area.

No visit to Marrakesh will be complete without mentioning its cuisine, an impressive fusion of Berber, Andalusia and Mediterranean cuisines. If you like spices, you’re in heaven, twenty-seven spices are combined for the famous Moroccan spice mixture ras el hanout, which is the base for the delicious tagines and beef dishes.

A local friend advised us that we should definitely try La Grande Table Marocaine at the Royal Mansour or Dar Yacout for dinner and the Pavilion at the legendary La Mamounia Hotel for brunch.

I still dream about the feat we had at Royal Mansour. The food and the service were incredible, but it’s sort of expected when the chef has three Michelin stars. What I adored was the building itself. The restaurant, set in its own lapis floored riad was one of the most luxurious and comfortable places I’ve ever been to.

I’m preparing yet another list of places to visit when the world turns to normal – or a new normal – and a return trip to Morocco is in the top ten.