Sailing from Fethiye to Ölüdeniz , there are three bays so special in nature and history and so unique in style and visiting patrons that they all worth a visit.

The first one is Turunç Pınarı, a beautiful bay of aquamarine waters, pink oleanders and towering cliffs ending in a little shingle beach. The sea is always clean and cool, even in July and August, so long swims are a pleasure there.

It is one of the most popular bays of the region, not only for it’s nature but mostly because of Osman’s Place, a very successful restaurant for a number of years. A couple of years ago it was sold to a producer from Istanbul for an exorbitant sum and the rumour was that he intended to turn the place into a boutique hotel which would destroy it’s natural beauty . Luckily, this prophecy has not yet materialised and the restaurant continues to be it’s delicious self.

There’s an L-shaped pontoon in front of the restaurant where you can either take a mooring or anchor. But it’s always crowded so a better option would be to anchor to the west of the bay and visit the restaurant with a dinghy. If you call, Ahmet will come and help with your anchoring or take you to the restaurant with his fast boat. And in the kitchen there is Sinan with his smiling face and positive attitude, doing his best to satisfy even the most pickiest of clients. The menu is rich and there is always something new to try. When we go there as a group we always pre-order the roasted lamb spit – seasoned with oregano and garlic and glazed with honey – but the seafood varieties are equally exciting.

With it’s tasty menu, shabby chic atmosphere and higher than average prices, Turunç Pınarı mostly attracts the business professionals of Istanbul, who go there for a bit of swim, a nice dinner and to rub shoulders with other İstanbuliotes. Tourists are a rarity here.

Another favourite is Karacaören, about 10 nm to the south and almost a world apart. It’s basically a largish bay surrounded by some very dangerous looking rock formations and a small island. Both the rocks and the island protect the bay and provide good anchorage. There are many moorings thanks to the courtesy of the restaurant. On the little island and at the end of the bay one notices ruins of buildings and high walls. In fact Karacaören was protecting the northern seaways of the town built on Isle of Gemiler, around one mile away. 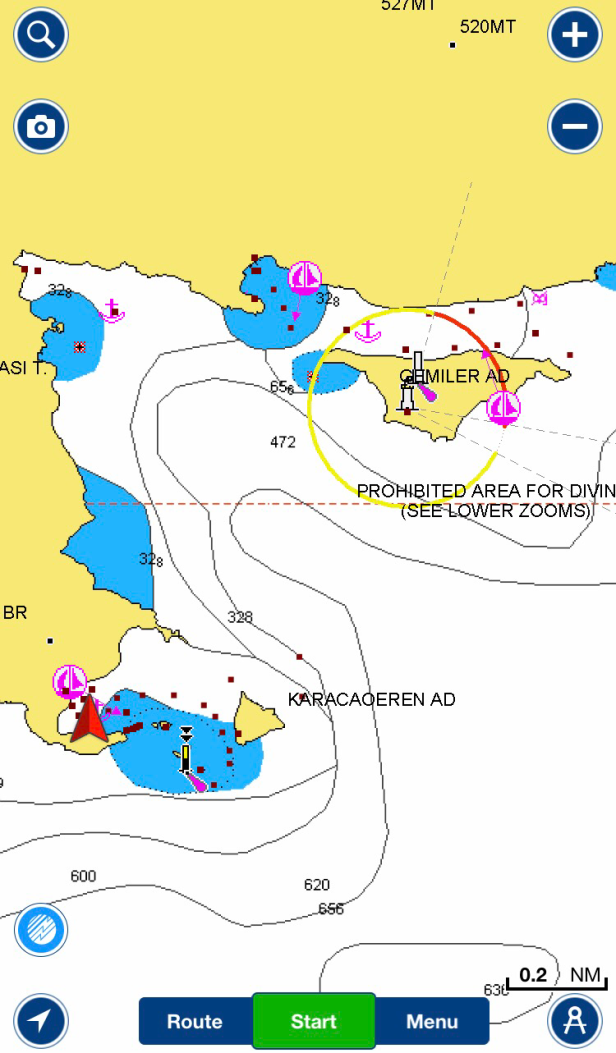 The restaurant is truly a family run affair. It was started by Muzaffer, brother to the founder of the bay restaurant at Göbün, and now run by his family. Their strong ties to this region is evident in the dishes and the atmosphere. When you are entering the bay, you’ll notice a boat leaving the little dock. It’s Şahin, a fresh college graduate studying for university exams, coming to help you to choose a mooring and tie your shore lines. Then he answers your questions, politely checks when you wish to dine at the restaurant and whether you need a boat transfer and then leaves you to enjoy the cool green waters or to explore the ruins of the old Byzantinians, Mostly you gawk at the amazing views of the Babadağ and count the paragliders coming down to the Belcekız beach.

In the restaurant Can, the eldest brother greets you, shows you the daily catch and your table. One can’t fail to notice the large bar, the little dancing area below the disco ball and the ping pong table. Later in the night, all will be busy.

Can is the manager / fisherman and knows all the regulars. And regulars from all over the world know and come to this little shabby restaurant with it’s simple menu and friendly atmosphere. There’s always a restaurant like this in all the sailing destinations around the world, Old tables and chairs, mismatched cutlery and a unique charm. You go there to have a nice dinner, booze and chat with fellow sailors, and you always have a good time.

That’s one of the places I collect stories. Plus, as a bonus, this one comes with one of the best views as a backdrop with the dominating shadow of Baba Mountain and the lights of Ölüdeniz creating a fantastic tableau.

In the kitchen there’s Ceylan, an ex-banker turned cook and also the middle sister, preparing the dishes together with Julie, originally from Netherlands who came here as a tourist one day, met Can and stayed on. Now she speaks perfect Turkish and she’s responsible for the mezes, the bar and managing the guests.  The veggies are coming from their own garden at Kayaköy, 8 km away, as is the running water through pipes.  They make their own cheese and yogurt from the milk of the goats their father keeps and if you go there for breakfast, the apricots and prunes for the home made jams come from their backyard, together with the olives. Couldn’t be more organic than that.

A small note on Kayaköy : After WW1 and the Turkish Independence War, the government of the new Turkish Republic made agreements with Greece and some Balkan countries that were all under the rule of the Ottoman Empire before the war to ‘exchange’ the people who suddenly found themselves living in another country not exactly sympathetic to their roots or religion. It was bizarre and often sad but it worked and whole villages were exchanged peacefully under this agreement.
Kayaköy or Lebessos as it was known then is one these exchange villages. It was a Greek Orthodox village built over the hills, and when the new occupants arrived, instead of populating the old village they chose to make their new homes in the plain, closer to the water and roads. So Kayaköy was abandoned in its entirety. Today its churches, houses and winding roads are run- down but very much standing, and of course a tourist attraction. It could be climbed from Gemiler Bay, or you can rent a car and drive there. It’s well worth a visit. Nowadays it’s also possible to buy one of the houses and renovate. I think we’ll soon see a bunch of fashionable little hotels and holiday rentals popping up there.

And there’s the Isle of Gemiler. It’s a small narrow island around 250 meters from the mainland, forming a seaway of around half a mile. It’s blue waters are deep and shores rocky and especially the island side provides good anchorage. Here you can put down your anchor at 30 meters and tie the shorelines to ruins of the buildings on the island.

And not any ruins. Gemiler is actually an open air museum with a history going back first to Lycians and later the Byzantinians. Modern day archaeologists believe that the island may be the location of St. Nicholas’ original tomb.They believe Turkish name for the island Gemiler Adası, meaning “Island of Boats” could be a reference to St. Nicholas’s role as the patron saint of sailors, and the island was a place of worship for the pilgrims en route to Holy Land between the fourth and the sixth centuries AD.

They might have a point, because there are the ruins of five churches, around forty ecclesiastical buildings and over fifty Christian tombs remain on the island along with a 350 metres processional walkway, which still is mostly intact. One of the churches was cut directly from the rock at the island’s highest point and the views from there are simply stunning.

If excavated, the island and the surrounding area could be one of the most interesting open air museums of Europe. Instead, the ruins are covered with pines and olive trees and left to the mercy of the elements, tourists and goats. In a country so rich in nature and history and so blind in appreciating them, it’s not a huge surprise.
Nevertheless, it’s a beautiful place for a hike around the ruins, swim the clear blue seas and marvel at the old habitants of this place. The mighty Babadağ is even closer where dozens of paragliders jump from it’s peak to enjoy the incredible views of Ölüdeniz and surroundings. They make an excellent sight with their colourful parachutes.

It’s a popular destination for the daily tour boats as well as water sports and some of them are violently loud and disrespectful so it’s best to anchor after 5 pm and leave before noon the next day.

Over at the Gemiler Bay, there’re a couple of really bad restaurants. Do yourself a favour and don’t bother going there. If you feel lazy, you can buy gözleme – Turkish pancakes- freshly cooked by a local couple on their boat and enjoy the changing colours of the seas from green to turquoise to dark blue. Sunsets are especially breath taking.

Gemiler is where you make magical moments to remember.