We decided to visit Bordeaux just after the harvest and found out that this is in fact a very good time to visit the region. The weather is great, the vineyards are looking beautiful in autumn colours and most importantly, visiting the Grand Cru Châteaux are pretty fuss-free.

We started our Bordeaux tour from Mèdoc, the home to the famous Grand Cru wines. Mèdoc region lies on the west banks of Gironde river and a wonderful  route – Route des Châteaux – connects all the famous appellations of Haut-Mèdoc, Margaux, Moulis, Saint-Julien, Saint Estephe and Pauillac, the largest town of Mèdoc region.  True to its name the route is lined with Châteaux, a number of which are producing some of the world’s best and most expensive wines.

We stayed at Château Meyre, a small château hotel surrounded its own vineyards right in the heart of Mèdoc. It was a cute little hotel with very comfortable rooms and a great breakfast.  We had a tour of their small vineyard and our charming host presented us with a bottle of their wines.

But before writing about what we did (basically drinking and more drinking) some facts on Bordeaux wines:

– Although people were growing wine in this region from the early Roman times, the region put itself on the map by selling most of its production to England from 12th cc onwards, especially when they managed to dry up the marsh lands of Medoc into world class wine growing terroir . In fact when the Spanish wine became famous among the riches of England in 17th cc, the owners’ of the largest Bordeaux producers opened their own taverns in London to sell their own wines and win back the British appetite.  In retrospect, I’d say a job well done. 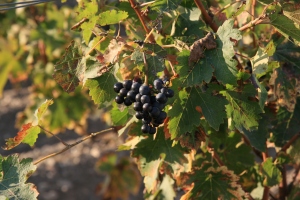 – England’s preference to the Bordeaux claret is pronounced over and over in the stories of its great novelists like Forsythe, le Carre and Roald Dahl.  You might remember the scene from any Le Carre novel where the foxy spy-master invites an associate / gifted underling /clueless journalist to his Gentlemen’s Club for a ‘bit of lunch and a quiet world’ and invariably invites the ‘old chap’ to the Club’s ‘decent claret’.  Dahl wrote two very good short stories about the Bordeaux wines (Taste and The Butler).

– As the British as well as the French appetite for Bordeaux wines have grown, the number of producers and prices of the wines have increased in parallel. To put some kind of an order among them, Napoleon III ordered at 1855 that a classification system to be created.  As a result, the famous Grand Cru classification was born mostly based on price & quality. Today the Grand Cru classifies 61 producers into five categories from Premier Cru down to 5th (5eme).

The problem is, the list has not really been updated since then. So if your grand granddaddy was not producing & selling his wine at Medoc in 1855, you can’t get your wine classified as Grand Cru today whatever its quality may be. In order to overcome this particular problem  and after years of discussions, the inventive French come up with different classifications (Cru Bourgeois, St Emillion Classification, AOC,VDP etc etc) and confuse the hell out of the wine drinkers around the world.

– Although each producer adds a special small twist, the Grand Cru Châteaux are all producing their wine using most of the same techniques that they were employing over the centuries; mainly due to tight regulations and strong tradition. For example they are not allowed to irrigate if there’s a drought, or they can’t cover up the vineyards if there’s a bad storm. Of course they don’t even think about adding any chemicals. So although they use the best available technology all through the process , their wine is still as natural as it comes.

– The roses you’ll see at the vineyards serve a very practical purpose. If that part of the soil is infected, the rose will show the effects of the problem faster than the vines. In other words, if the roses die, the farmers understand there’s a problem and try to cure it.

– Now almost every major producer is targeting the Chinese market and in order to increase their brand recognition, most houses have ‘Chinefied’ their names. For example the Château Beychevelle is known is China as The Boat with the Griffin due to its logo.  Not exactly the French way, but Bordeaux producers seem to know how to enter to new markets.

Wine tasting in Bordeaux is easy. Or to quote my husband who likes his computer games ‘They made Bordeaux interface user friendly’.  Most Grand Cru’s require appointments (which you can get on the internet) although some have daily scheduled tours. The smaller producers don’t even require that, you just knock on their doors and asked to be shown around and taste their wine. A typical tour is around one and a half hours including the wine tasting and costs between 7-15 EUR per person.  A nice hostess welcomes you and while explaining the wine making process , she takes you to the vineyards, Vat room , cellars and finally the tasting room where she generously pours glass after glass of great wine while chatting about this or that.  Since we visited the region just after the harvest, the workers were actually performing some of the tasks that our hostess was explaining. An unseen benefit was the smell of fresh wine which was so powerful; it made us light headed before we hit the tasting rooms.

We visited quite a few. Apart from the world famous Premier Grand Crus,  the ones that stood out are Château Pontet Canet  which is the only Grand Cru that is certified as organic and biodynamic  and Château Pichon Longueville Baron . In the first one the process is totally natural to the point of using horses instead of any kind of machinery. I loved the second one for it’s fairy castle, beautiful cellars and excellent wine. Among other wines we tasted, the Ch.Pichon Longueville Baron 2004 was excellent.

In Paulliac right beside the cellars of the Château Lynch-Bages, there’s the Bages village with its café-restaurant, bakery, and boutique, as well as its arts and craft studios set around the central square.  We had a very good lunch at Café Lavinal on local farm produce and tasted the wines of the nearby châteaux. My potato and lardon salad was so full of taste,  I had to take the recipe.

In Margaux, after visiting the famous Château Margaux’s vineyards we had a superb dinner at La Savoie.  I had a delicious sole meunière while my husband was enjoying his  entrecôte with sauce Bordelaise.  It was a perfect ending to our Mèdoc tour.

After Mèdoc we continued to Graves and Sauternes and took the Circuit de Sauternes. In Mèdoc the villages are very cute (especially Saint Julien) and the vineyards and Châteaux are lined up one after the other. In Graves and Sauternes, although the countryside is more beautiful,  I found the region less charming than Mèdoc.  From a foodie angle Graves has nothing to worry though. I still remember the taste of the magret du canard that we had at Restaurant Le Luma.

One note on Sauternes wines:  I know some always prefer red wine and with good reason; however nothing beats a glass of Sauternes with a plate of homemade Fois Gras !

We finished our week at Bordeaux,  a city old, rich and beautiful. Situated on both banks of the Garonne river, it was an important trade centre from 11thcc thanks to its ‘moon port’. By 18thcc, the city was at its peak and played a big-scale role model to Baron Haussmann’s transformation of Paris from a medieval town to today’s beautiful capital.

During the days  we walked the boulevards and quays, enjoyed the sights, sat at the roadside cafes and drank Lillet (we both prefer the red, but the white is delicious as well), looked at the shop windows at the Rue Ste. Catherine and climbed the 200+ stairs to the bell tower to gaze at the city.  One night we met with our friends Anne and Andre for a delicious dinner at Bistro Fernand and enjoyed the lights reflecting on Miroir D’eau at Place de la Bourse.

But for me the highlight of the tour was the night we spent at the Bordeaux Opera listening to Carmina Burana.  The opera house was beautiful, the ballet combined best of modern and classical dancing and the music was very moving.